The Quickest Way to The Heart is Pasalubong 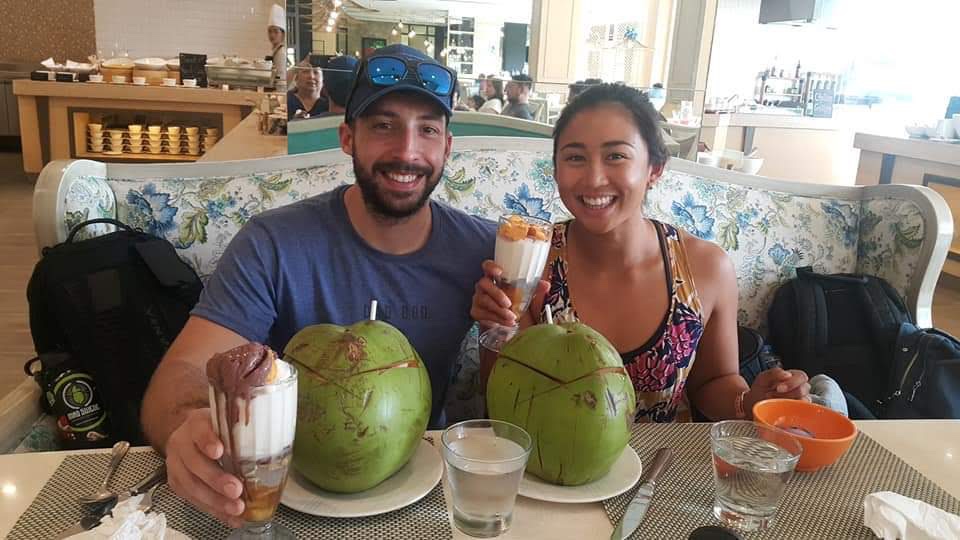 As my darling ass husband says,

“I’m married to a Filipina, I have no control over my body anymore.”

In every culture, our strongest and even earliest memories are of food and of whom we shared it with. For Filipinx’s, the connection to our culture, food, and loved ones is strong. So strong that there is a specific word for the treats that someone sends you home with: pasalubong (pah-sah-LOO-bong).

The first time my parents met my husband, they insisted he come over for a home-cooked meal since he had been living away from his own family for quite some time. Just the four of us. The day came and they made chicken adobo, lumpia, steamed jasmine rice, and suman for dessert… for 10 people. Jarrod went back to his villa with enough food to last two whole days (yes, breakfast, lunch, dinner, and some snacks). So, without saying anything, they told them they liked him. Now, a few years down the line, the food he asks for after coming back home from a long trip is Filipino.

COVID-19 really threw a wrench into Jarrod’s plans to come home. So he has been out of the country for work since last year. Now that his contract ends this month, I am thinking about food to make for his homecoming. It is also #FilipinoAmericanHistoryMonth, which got me thinking…

Filipinos are the second-fastest-growing Asian demographic here in the United States but there’s only a handful of Filipino restaurants, anywhere. We see a lot of Thai, Indian, Vietnamese, and Chinese restaurants. So what is it about Filipino food that is so underseen and underrated?

So, What IS Filipino Food?

In my favorite cookbook The Philippine Cookbook, Reynaldo Alejandro summarizes Filipino food as a reflection of the diverse influences in Philippine history. Filipino cuisine draws influences from its neighboring trade partners and occupants.

From China, Filipinos were introduced to rice and dishes such as lumpia and siomai. Ingredients like coconut milk, galangal, tamarind, and fish sauce came from what is now Thailand, Malaysia, Indonesia, or even as far as India and the Arab world. From the Spanish colonization, flour, peppers, tomatoes, potatoes, and corn were introduced. After World War II, the surplus of American canned convenience foods like spam, evaporated milk, corned beef, and hot dogs climbed into Filipino cuisine.

Filipino Cuisine and its Historic Transformations

Throughout the Spaniard colonization and American occupation, Filipino cuisine did not quite look like itself anymore but then evolved. But maybe, it’s the already diverse components of Filipino cuisine that make it such a good vehicle for new cuisines. Many of the Filipino dishes post-Spanish and American occupation have Spanish names. In Spanish, we have dishes called flan, empanada, afritada (or, apritada), lechon, and tocino. However, their flavors are distinctly Filipino with the addition of soy sauce, fish sauce, lemongrass, ginger, and coconut vinegar.

Even the canned food surplus left behind by Americans was turned into “-silogs”. These are Filipino-style breakfasts fried up and served with fried rice. The si stands for sinangang, the log stands for itlog (egg) plus meat.

Spam, fried rice, and eggs? Spamsilog. A whole breakfast order in one word. American occupation also brought foods like the fried chicken which Filipinos have created their own recipe and brand of, Jollibee.

This reclaiming of our cuisine has birthed dishes that are not only wholesome, but are complex with depths of flavors; a single dish like kare-kare (kah-rreh-kah-rreh) are every combination of shrimp paste-y bagoong (bah-goh-ohng) saltiness, oxtail savory, and peanut sauce-y sweet.

These complex and wholesome dishes are what many of us Filipinx’s think of when we hope for that pasalubong from Tita’s (TEE-tah; auntie) house or mom’s house. There’s something for everyone’s palate. Filipino food is not, by the technical culinary standard, “pretty” or “sophisticated” in its presentation. But that’s what we know, and that’s what mom knows, and that’s what Lola (LOHH-lah; grandma) knows and it is so precious to us. Maybe that’s why it’s stayed so long in the box of “humble home cooking,” gifted to you in a recycled Cool-Whip container.

Filipino Food Emerging in the Casual and Fine Dining Scene

How can it still feel like home and comfort for all classes of Filipinx hearts and be seen by the culinary world as a titan of cuisine on its own? Pasalubong.

Pasalubong is a symbol of love and appreciation in Filipino culture. Now, renowned Filipino chefs around the world who grew up with this concept further this meaning through exposure in fusion and casual to fine dining. These culinary visionaries are repackaging the heart of Filipino cuisine and reintroducing it to the world doing what Filipino food does best – adaptation.

Flip Sigi in New York is delivering bold Filipino flavors in the form of out-this-world tacos and burritos. Pig and Khao is amping up the shared techniques and ingredients in Thai and Filipino street food. Jeepney NYC is a gastropub that introduced the kamayan (kah-MAHY-ahn, to use your hands), a whole feast spread out on banana leaves eaten without utensils. LASA Los Angeles puts a modern take on traditional Filipino dishes with local Californian ingredients using classical cooking techniques. Flip ‘n Patties in Texas stacks up Filipino street flavors in juicy burgers. Scrumptious Filipino deliciousness presented to the world, sharing our ever-resilient Filipino identity that evolves with each culture we are immersed in.

So What IS Filipino Food, Now, and Where is it Heading?

It’s now something far outside the cool-whip container that’s sharing itself as world cuisine, to show the world just who we are. From bold to robust, from dynamic to welcoming, Filipino is loving.

Pasalubong on the grandest scale.